This story is entirely my own fault, and I’m sharing this it so you don’t make the same mistakes I did.
i seriously doubt you would
It starts out with a comment from Jayme, suggesting I wash the linen hanks so they’ll soften before I knit with it.
jayme honey, i’m not blaming you for this…it’s all my fault
I tie the hank in 4 places (making it 6 places with the 2 that are already there), drop it in my easy-does-it-can’t-felt-to save-my-life front loader. A little detergent, a little fabric softener, and we’re off.
i go upstairs, make myself a french bread pizza, and wait for my soft and fluffy hank to finish its bath
An hour later I take out the hank and it’s a rumpled mess. It’s linen’s version of felted. It’s twisted and knotted all onto itself. I try to untangle it but wet linen is like velcro and it won’t budge. It even makes irksome creeky noises when I pull on it. I put it into a lingerie bag and let the dryer do its thing.
at this point you’re probably wondering why i didn’t use the bag for the wash cycle. join the club.
Three cycles of drying later and the hank is fluffy, soft, and haloed.
and knotted, kinked and clumpy
It’s midnight, and I go to bed, exhausted and annoyed.
Next night, I detangle it enough to get onto the swift and commence unraveling it inch by inch by hand.
2.5 hours later and i’m done. i considered taking a pic but i just didn’t have it in me
Equipped with a wonky looking (but detangled) hand-wound ball, I drop it in a tall box on the floor and attach the free end to the winder.
this was blissful for about 20 seconds
And then, the ball exploded into three mini-balls. The ends wound all up onto each other, and it was again a mess.
i swear this happened, and even though i had consumed 4 mai tais earlier that evening, it in no way impaired my perspective. the ball exploded and made three mini balls of hell. they were multiplying.
Another hour gone by (with a TIVOd episode of CSI: Miami in the background) and I was back in business.
i was a ball-winding-madwoman. no one could stop me.
And no one did stop me. But something did. It was at this moment that the 2/3rds of a center-pull-ball-in-progress did the only thing it could do to thwart me.
It flew off the winder. In majestic form. It arced and hit the wall with a thud, trailing a lone strand of yarn still connected to the winder. For a brief moment it was beautiful, almost comet-like.
The fucker committed suicide
Isabella thought this was just grand, and did what any kitty would do to her prey. She pounced on it and squeezed it with all four paws.
I extracted the ball from her and plotted my next move.
I took the suicidal ball and stretched and pulled and got it back on the ball winder. Conscious of my speed, I wound at a slower pace, stopping occasionally to make sure the ball didn’t work its way back up the winder.
the yarn was obviously committed and i wasn’t taking any chances
A few moments later I emerged victorious.
Behold, a pre-washed, fluffy, soft, drapey and cuddly ball of yarn. 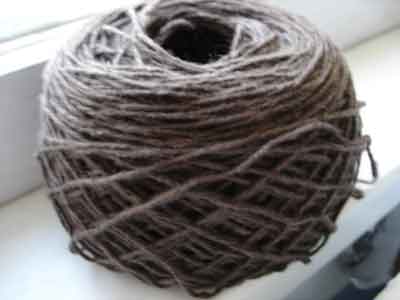