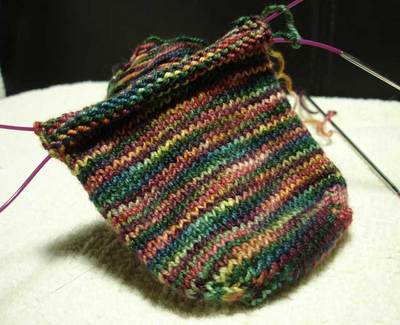 If you’ve been reading this blog for a while, then you know that I really have a hard time using a yarn that pools or flashes.
So imagine my delight when I re-tried the yarn with a slightly smaller stitch count (52 sts) and a plain stockinette foot.
NO POOLING
To compare the difference, here’s the old sock in the diagonal rib with a few extra sts. I think there were 60 sts in the sock ( the stitch pattern made for a smaller sock). The pooling was just about as much as I could handle.
But this? This is behaving like Koigu, with its short color changes.
I’m not getting overly confident though — I know this could change at any moment.
Toe-Up Cast-On
Debi asked in the comments which cast on I used.
I’ve been using Judy’s Magic Cast-On since the article came out this past spring. I’ve tried lots of different cast-ons: provisional for a short row toe, figure 8, the rectangle method (don’t know what that’s called), Turkish, and a few others that aren’t coming to mind.
I first tried knitting socks on DPNs. I preferred the short row toe then, because the other methods were a lot harder for me to execute with the DPNs. Once I switched to circs, I quickly became a fan of the Figure 8. It was quick, and after knitting the toe it was easy to go back and tighten it up.
When Meg Swanson’s article came out in last fall’s Vogue Knitting, I gave the Turkish cast on a try. I know a lot of toe-up knitters like it, but it didn’t seem as smooth to me as the Figure 8. Everyone knits differently though, so don’t discount that cast-on because of me. I think I’m in the minority. If you’re curious how to do the Turkish cast-on, Debi did a great tutorial for it.
So, back to Judy’s magic cast-on. It’s become my favorite because (like the Figure 8) it’s not fiddly, and (unlike the Figure 8) you don’t have to go back and tighten anything up. It’s as tight as it should be from the very beginning.

47 thoughts on “That’s What I’m Talkin About”