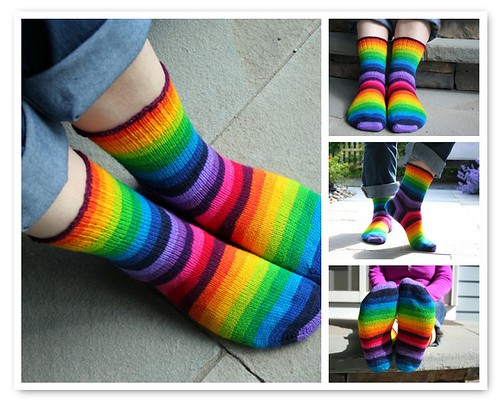 Finally – an FO in 2014.  I’ve knitted a ton this year but haven’t been able to concentrate on anything.   So when the desire to finish these socks popped up last weekend I ran with it.

I started these socks back in February so you might need a refresher.

It started out as this yarn. 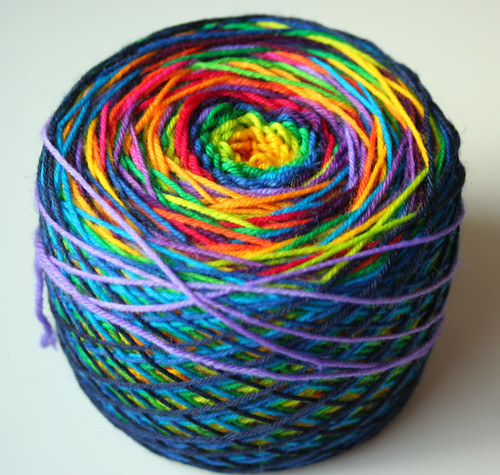 15 Colour Rainbow by Fab Funky Fibres in her 75% superwash merino, 25% nylon base

I knit the first sock (also in February) 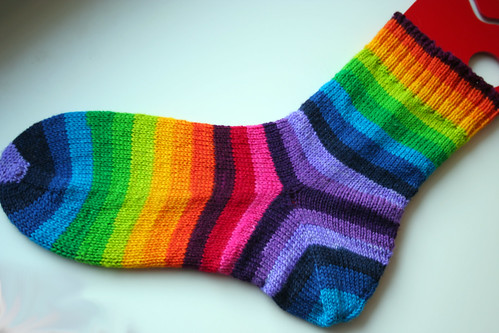 Knit part of the second sock…and there it sat.  For months.  Until last weekend.

The knitting was simple – my standard toe-up on 2.25mm over 66 sts.  At the suggestion of a blog reader I used the Crystal Socklet afterthought heel (LOVE IT!).

The “hardest” part was keeping track of the stripes on sock 1 so I could match them for sock 2.

After finishing the first sock I was disappointed at how short they were.  I’d never knitted an afterthought heel so I wasn’t sure how long to make them.  Had I had more experience I would have made them longer.

And that would have been a mistake.

One of the lessons this sock taught be was just how much yarn I used up matching the stripes.  Fifteen colors sure makes for a lot of waste.  After I finished sock #2 I knew I wouldn’t have had enough to do much more.  Maybe 2 more stripes on the leg but that’s it.  So we’ll chalk that up to dumb luck.

I also worked the heel over more than half the sts – I did 3 more on each side.  While they do fit I don’t think it’s necessary given the extra shaping this heel has – you decrease at different rates as you get closer to the end of the heel and the decreases are done in a 4-point spiral.  No biggie though – it’ll just be that much quicker next time.

But let’s not focus on the things I’d do differently next time.  Because people – I FINISHED A PAIR OF SOCKS.

Just in time for summer.

I’ll catch you on the purl side…